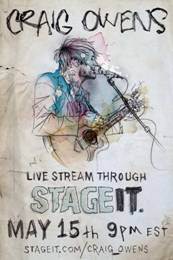 Tomorrow, Chiodos frontman Craig Owens will be appearing live on Stage It tomorrow night at 9pm EST/6pm PST. Since he began his virtual live shows via Stage It back in January, Owens has sold out every performance to date. “There are two ways that really resonate with me, in what I enjoyed about the last Stage It experience,” Owens states. “First of all, playing these online shows are all about the fans. Reconnecting with them, on a personal and vulnerable level, is an overwhelmingly enjoyable, rewarding, and adventurous experience each time I get to do something like this. I think it breaks down the walls of the artist-fan relationship in ways that a rock performance with Chiodos could never do. The other side comes from a more personal perspective. The truth is, I just love making music. I love being creative. I love performing. I love singing, and I love playing guitar. Any chance I get to be creative, I take it and run. So any time I have a chance to grab a guitar, and sing in front of people that care – I take that chance.” Chiodos is currently winding down their incredibly successful Devil’s Dance Tour, which wraps up on May 21 at Irving Plaza in New York City. 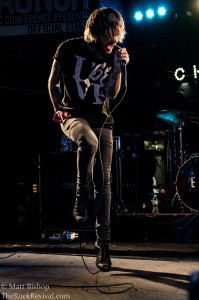 the first single off their new album, Devil. The album came out on April 1 via drk/lght records, a subsidiary of Razor & Tie and debut at debuted at #12 on the Billboard Top 200, selling over 18,000 copies in it’s first week of sales. The disc also debuted at #1 on Billboard Independent Albums, #2 on Billboard Hard Rock, #3 on Billboard Rock Albums. The album is the band’s first since the reformation of the original lineup in 2012, and the follow-up to 2010′s Illuminaudio. The new record will feature the addition of guitarist Thomas Erak (The Fall of Troy, Just Like Vinyl). “Look at us now,” frontman Craig Owens stated. ”We’re right back where we started. It’s our time to really do things right.” During his time away from the band from 2009-2011, Owens released a solo album, With Love, in 2009 on Equal Vision Records. In 2011, Owens’ new band D.R.U.G.S. released their self-titled debut LP, which landed at #29 on the Billboard Top 200. 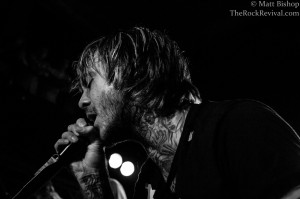 To date, Chiodos have released three studio albums, their greatest success coming from 2007′s Bone Palace Ballet, which debuted at #5 on the Billboard Top 200. Throughout their career, the band has toured with the likes of Nine Inch Nails, Alice In Chains, Black Veil Brides, Atreyu, Tonight Alive, and more, as well as several Warped Tour appearances. Chiodos are currently on their Devil’s Dance Tour with special guests Emarosa, Hands Like Houses, Our Last Night, and ’68. – by Matt Bishop (@The_MattBishop)