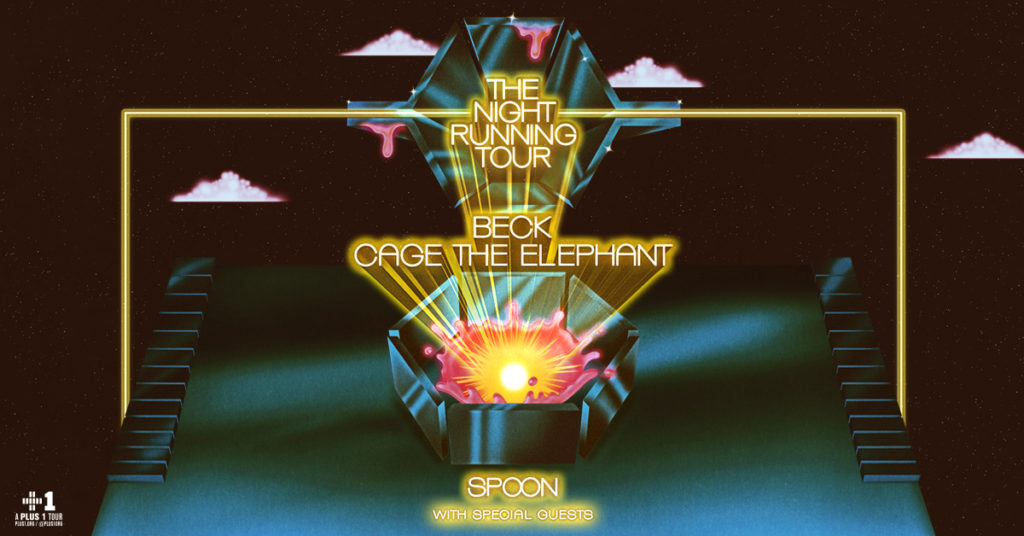 (TRR) – Alt-rock chart toppers Beck and Cage The Elephant have announced The Night Running Tour. The co-headline outing kicks off on Thursday, July 11 at the Sunlight Supply Amphitheater in Ridgefield, WA and wraps up on Friday, August 30 at the Coral Sky Amphitheatre in West Palm Beach, FL. Very special guests on the trek will be Spoon. Additionally, Starcrawler, Wild Belle, and Sunflower Bean will open on select dates respectively.

On this tour, Beck and Cage The Elephant are joining forces to give back. Together they’ve partnered up with PLUS1 and $1 from every ticket sold will be donated back into each city they are playing in, supporting local food security initiatives as they work towards ending hunger in their communities.

Beck has produced two songs this year – “Tarantula” from Music Inspired by the Film ROMA and “Super Cool” from The Lego Movie 2: The Second Part. His last album Colors (Capitol Records, 2017) garnered two GRAMMY Awards for Best Alternative Music Album and Best Engineered Album, Non-Classical. The disc peaked at No. 3 on the Billboard 200, and No. 1 on Billboard’s Top Alternative and Top Rock Albums charts.

Last Week, Cage The Elephant announced their fifth studio album Social Cues which drops April 19th via RCA Records. The album is the follow up to their GRAMMY Award-winning LP Tell Me I’m Pretty. Tour mate Beck is featured on the band’s new track “Night Running.” Fans can pre-order Social Cues HERE. Cage The Elephant hold the record for the most #1 Alternative songs of any artist this decade. They’ve had 7 Billboard #1 singles with 11 singles landing in the Billboard Top 10 and digitally have a combined 1.5 billion streams worldwide.

Step Inside the Mind Of Ashley Ember

Ex-Megadeth Guitarist Chris Broderick To Tour With In Flames