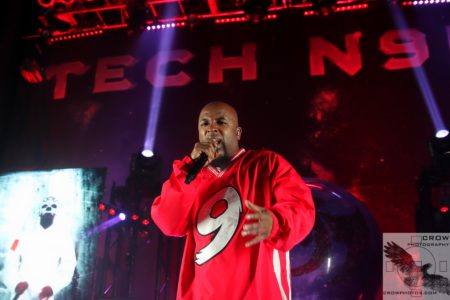 Strange Music was in the House, literally, with Tech N9ne’s “Planet” Tour 2018 featuring Tech N9ne, Krizz Kaliko, Just Juice, Mackenzie Nicole, Joey Cool, and King Iso at the House of Blues in San Diego on May 11, 2018. 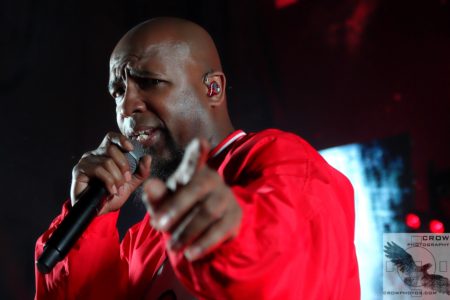 Last year I had the great honor to interview Tech N9ne at the AfterShock festival where we talked about the driving forces behind his music — he said he is driven by family, beats, life, and smiles… yes, smiles, lol, and who would have thought that this fierce badass was so humble! Tech N9ne also said he would be nothing without these driving forces and would not be where he is today… and the show at the San Diego House of Blues was literally all that and more. As an independent artist and co-founder of the Strange Music label, there was nothing strange about the group of artists that performed their music nor the eclectic “Technician” fan base that was in the House. 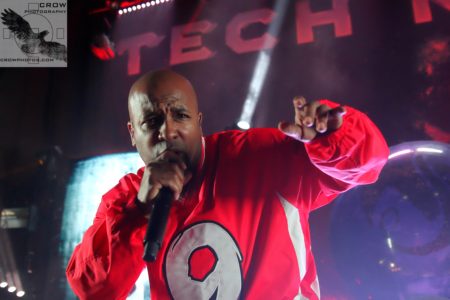 The show was a high tech collaboration as well — not as in San Diego’s notable High Tech High, but as in all of these artists taking their musical artistry to a higher level, with their rapping, singing, and use of video technology to further visualize their musical messages. Tech N9ne had a hologram video of himself while he performed, adding more of himself to the show with a deeper perspective and introspective, showing him and himself dueling with dual “Comfortable” beats. Later in the show there were videos of a planet and snippets giving a sense of Tech’s “kingdom of darkness” with a game of thrones feel and libations depicting him as king of his new “Planet” album and king of this tour. 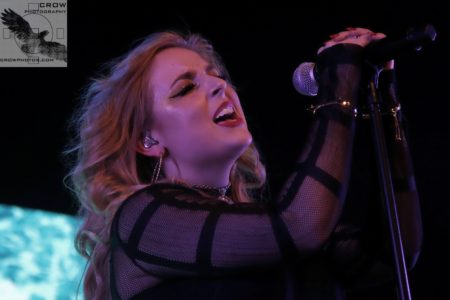 This show at the San Diego House of Blues was a rocking rap fest with six sets including an unexpected Mackenzie twist, singing her heart out like an operatic Western meadowlark, who is a beautiful songbird from Kansas City (KC) as well. Connecting this show of masculinity with feminine pop beats, she sang about life and love while hearts and broken hearts flashed behind her reiterating those messages in her songs. She performed “Habanero” with Tech N9ne from the new “Planet” album was definitely hot and spicy! 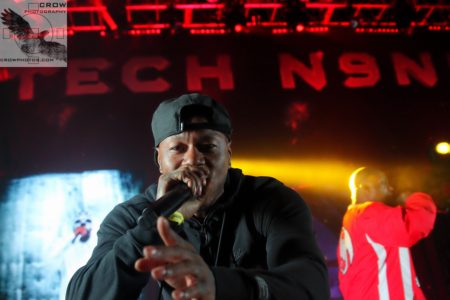 King Iso along with King Kash opened the show and these two rappers were as hard core as their orange jump suits. Later in the show, King Iso performed “Bad JuJu” from the new “Planet” album with Tech N9ne, which was nowhere near bad, but just as badass like the both of them! 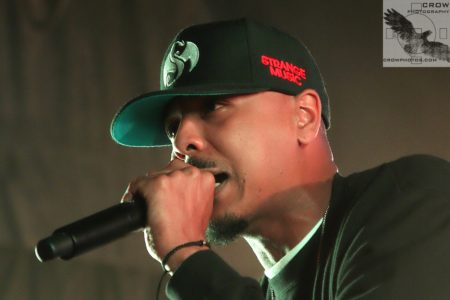 Joey Cool is classic rapper in and of himself, not only with his cool iconic logo and Frank Sinatra intro, but reflective of an old soul, fierce with KC at his core and sweatshirt, like Tech N9ne and his KC jerseys. His lyrics are deep and he also mixes up his rap with rock, like Tech N9ne, and collaborated with a bassist at this show, which was so dope seeing him mix it up with live music like that with live guitar. Later in the show after his set, he performed “Tappin” from the new “Planet” album with Tech N9ne, and they definitely tapped it! 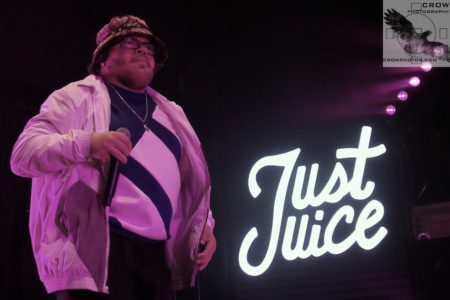 Boston based Just Juice came across as the “technical artist” he is known for on the streets given his rapid fire rapping skills and high speed surrounding his words. He brought along to the stage a local San Diegan friend who also emceed with him. He shared his story about being an underdog and his high school teachers saying he wouldn’t amount to much… he was proud to say he has proved them wrong, adding words of inspiration to his set. According to Wikipedia, his “aim is to bring flavor back into the hip hop we all know and love”… based upon his performance at this show, he is definitely on the right track and spicing it up along the way with his intense flavors! 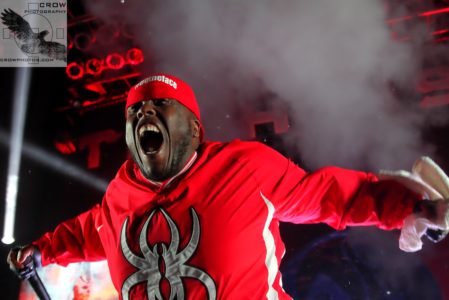 Krizz Kaliko, is a veteran rapper like Tech N9ne with gospel and poetry at his core. He got down at this show, sweating it out on the stage and told the “Technicians” that it was hard work being up there, but so worth it in so many ways to spread his words. He performed fan favorites like “Anxiety”, and throughout the show, he kept the beats flowing with old and new collaborations with Tech N9ne, such as “Red Byers (Say Som’n Do Som’n)” from the new “Planet” album. 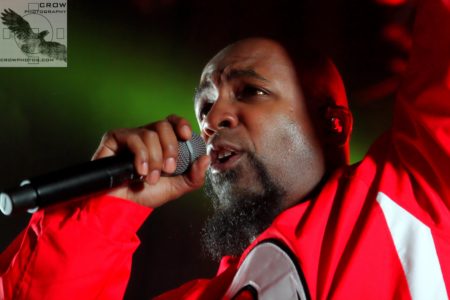 There was nothing strange about this show but love for Tech N9ne, this group of independent artists, and the “Technicians” — everyone was totally connected like the chains on their pants to the blinged up Strange Music necklaces being worn by the artists and fans alike! Gratitude was also in the air adding to the heartfelt vibe, especially when a couple got engaged during the show — such an expression of true “Technicians” to the core and what Tech N9ne is all about! 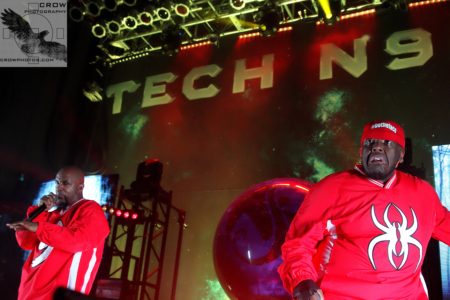 All of the artists brought it on the stage at the San Diego House of Blues and ended the show by coming back out on stage all together in a family unit, totally supporting Tech N9ne’s driving forces of family, beats, life, and smiles… such great introspectives that are not only profound, but just as fierce and true in the Tech world. 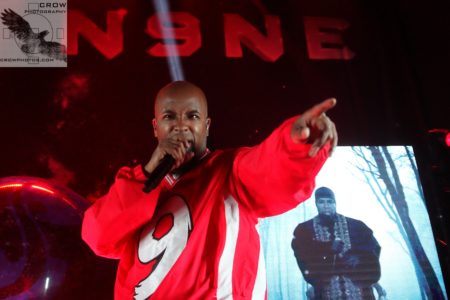 Like I said in my AfterShock article, Tech N9ne is a true jack of all trades in the entertainment world, not only as an American rapper, songwriter, record producer, actor, and entrepreneur (as defined by Wikipedia), but as a fierce multi-talented and multi-faceted badass to boot. He is also in the craft beer business, and on June 15th, at a local event in KC, he will be rolling out “Bou Lou”, which is a craft beer inspired after his hit “Caribou Lou” — another genius collaboration, but instead of Malibu rum, 151, and pineapple juice, the beer is wheat based with coconut and pineapple flavoring… it’s all about the mix these days and sounds like a tasty hit in the making if you ask me! 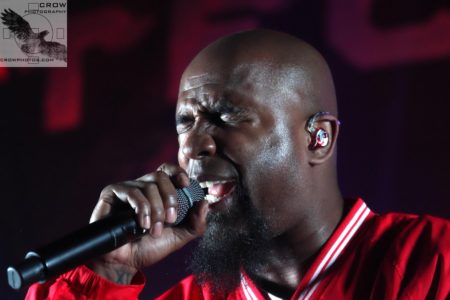 Tech N9ne is the driving force behind the Strange Music label as one of its two co-founders — with his group of artists at the label and everyone else he influences, in addition to the “Technicians” jamming along with him at this shows, his rockin’ rap is definitely unbeatable. He by far exceeds his urban dictionary definition of being “the most talented rapper in the game” especially with his four driving forces at his core: family, beats, life, and smiles… and about the smiles, everyone including myself left this fierce show smiling so mission accomplished at this San Diego stop on the “Planet” tour. 🙂

For a slideshow of photos from the show, see below:

The new “Planet” album is all about the beats, both old school and new, so check it out. Technicians are always wanted so be sure to catch Tech N9ne in a town near you! On March 2, 2018, Tech N9ne released his 20th studio album, “Planet”, which includes collaborations with Mackenzie Nicole, Krizz Kaliko, Joey Cool and King Iso. The “Planet” tour featuring Tech N9ne, Krizz Kaliko, Just Juice, Mackenzie Nicole (when available), Joey Cool, and King Iso is hitting 57 venues across North America before wrapping up on June 23, 2018 in Denver, Colorado. The full list of dates and cities can be found below:

Check out the “Tech N9ne (Don’t Nobody Want None)” video, with iconic/old school hip hop beats, as well as the “Planet” tracklist below: https://www.youtube.com/embed/hl-LSOpkO38