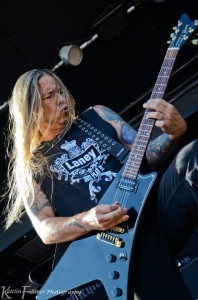 Sin. Bones. Heavy metal. These are code words for the band Fozzy. In the wake of the release of their fifth album, Sin and Bones, I caught up with lead guitarist Rich Ward on the band’s tour bus at the Rockstar Energy Drink Uproar Festival to talk about the record, the tour, the music industry, and much more. It’s one of the cooler, more straight-from-the-heart conversations I’ve ever had with a rocker.

When I asked how the tour was going so far, Rich replied, “Well, if you sleep in too late, you get woken up by the first band of the day.” Rich made this statement in jest, of course. He went on to say that “this is a killer bill,” and the Fozzy guys were stoked to be apart of the festival. Early in our conversation, Rich expressed his love for touring and savoring the opportunities he gets to do what he loves – play music. In particular, he addresses bands that take advantage of their ‘rock star’ status. “It’s almost disrespectful to all those killer musicians that haven’t had their break, to take it [touring] for granted.”

The band’s new album is a first for the band in many aspects. Not only is it their major label debut on Century Media Records, but it’s the bands first Billboard-charting album. Sin and Bones debuted at #143 on the Billboard Top 200, and #1 on the Billboard Heatseekers Chart. As far as a theme for the record, Rich stated, “Lyrically, it’s all over the board. Never have we discussed doing a ‘concept record’.” Musically, however, the album has a fairly distinct sound. “The album is pretty melancholy; it’s a dark record, it’s a heavy record.” Rich went on into greater detail about the album, and the band’s songwriting process. Then, Rich and I found common ground on riffs, and what makes a band ‘heavy’. One of the best epiphanies I’ve ever come to in an interview.

Fozzy was founded in 1999 by Stuck Mojo guitarist Rich Ward. Soon after, Ward met frontman Chris Jericho at a show in 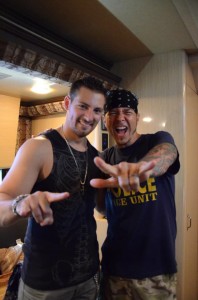 San Antonio, TX and invited him to play with the band. Jericho jammed with Fozzy for a few sessions, and officially joined the band in 2000. The band released it’s self-titled debut in 2000; a covers album with two original songs. They followed it up with 2002’s Happenstance, another covers album with a few originals sprinkled in.

After extensive touring, the band made the transition to a wholly-original act, releasing All That Remains. The album featured guest appearances by the likes of Zakk Wylde (Ozzy Osbourne, Black Label Society), Mark Tremonti (Creed, Alter Bridge, Tremonti), Myles Kennedy (Alter Bridge, Slash), Marty Freidman (formerly of Megadeth), and Butch Walker (Marvelous 3). The album sold over 100,000 copies, and the band played their biggest show to date at Download Festival in Donington, England.

With tremendous momentum, Fozzy grinded out a tour and immediately began work on their fourth album, 2010’s Chasing The Grail. The album produced arguably the biggest single of their careers, “Martyr No More”. Having just wrapped up Upoar Festival this weekend, Fozzy are currently on a US headlining tour. They are keeping busy until Christmas, heading over to Europe with Soil in the late fall. In 2013, the band are heading out on a tour which cannot be announced yet. What is announced, however, is the band’s appearance at Soundwave Festival 2013 in Feb-March, with the likes of Metallica, Linkin Park, blink-182, A Perfect Circle, Slayer, Killswitch Engage, and many, many more. So much touring ahead for Fozzy, so grab your tickets and get ready for heavy. – by Matt Bishop (Photos Courtesy of Kaitlin Follmer (Amped Up Aperture Photography)

Skate 'Em All - Metallica, Vans Team Up for Shoe Collection