Young Guns rock with the big guns at Carolina Rebellion 2013 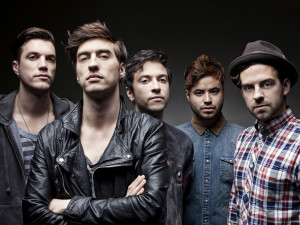 UK rockers Young Guns broke out in June 2009 with their debut EP, Mirrors. In August, they toured Europe with Lostprophets. With that momentum, Young Guns recorded and released their debut full-length LP, All Our Kings Are Dead, in 2010 via their own label, Live Forever. The album hit #43 on the UK Albums Chart, and #3 on the UK Rock Chart. The band supported the album by embarking on their own UK tour, as well as supporting Danko Jones on their European tour. They landed slots at Download Festival and Reading Festival, among others, that summer. In February 2011, Young Guns supported Yellowcard and All Time Low on their European tour.

In November 2011, Young Guns hit the studio to begin work on their sophomore effort, Bones, which was released on February 6, 2012. The album was more commercially successful, hitting #19 on the UK Albums Chart and #2 on the UK Rock Chart. The band supported the album with a string of UK club dates called The Bare Bones Club Tour, and supporting Enter Shikari on their European tour. In the spring of 2013, Young Guns supported Bullet For My Valentine and Halestorm on their 2013 North American Tour, with festival stops at Rock On The Range, Carolina Rebellion, and more. The band returned to the UK to play Download Festival once again, and then took some time off to write music for their next album. More U.S. dates are on the way, and a new album is in the works. – by Matt Bishop