It’s a rare moment that I get to sit down with someone who’s influence runs so deep throughout all of rock n’ roll. I got that chance tonight. I’n the shadow of his hometown of New York City, I got a chance to sit down with MarkyRamone, drummer of The Ramones. 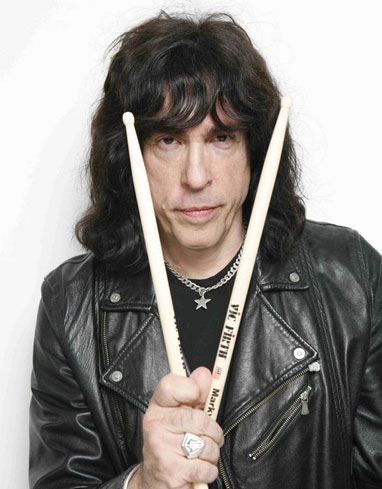 The Ramones are widely considered to be the founders of punk rock. With their fast and furious style of rock n’ roll, they laid the foundation for bands like The Sex Pistols, The Misfits, Agnostic Front, Green Day, and blink-182. 1977, Marky, then a member of The Voidoids, embarked on a historic U.K. tour with The Clash. After the tour in 1978, Marky ran into Dee Dee Ramone at the legendary New York City punk and hardcore club CBGB, and the rest is history. Marky joined The Ramones in 1978, and they recorded another Ramones classic, Road To Ruin.
I brought an original Road To Ruin album to the interview. Marky took it and said, “Wow…is this an original? I miss vinyl.” The sign of a true godfather of rock. The album was an epic debut for Marky with the band, and another blueprint of punk rock. It yielded arguably the band’s biggest hit of all time, “I Wanna Be Sedated.” It was awesome to hear Marky talk about the old days, and his contributions to the genre and music as a whole.
Now, Marky is moving forward and carrying on the legacy of The Ramones with his new band, Blitzkrieg. The band is currently touring the world, playing a massive 35-song set each night of allRamones classics. Blitzkrieg has also released two new singles, “When We Were Angels” and “If and When.” In addition to touring, Marky keeps busy with his hit radio show, Marky Ramone’s Punk Rock Blitzkrieg on Sirius/XM Satellite Radio. Marky also has it’s own brand of pasta sauce, Marky Ramone Brooklyn’s Own Pasta Sauce, which helps to support Autism. He also has a much anticipated book in the works, where he’s going to tell the story of The Ramones and more. Be sure to tune in to Mark’s radio show, and check the band out on tour! The Marky and the boys will be in Atlantic City, NJ at the Atlantic City Convention Center on 3/30, Sonar in Baltimore, MD on 3/31, and finally…Marky makes a triumphant return to The Bell House in his hometown of Brooklyn, NY. – by Matt Bishop
FACEBOOK.COM/THEROCKREVIVAL
Prev Post

Killing All Control with George Lynch of Lynch Mob