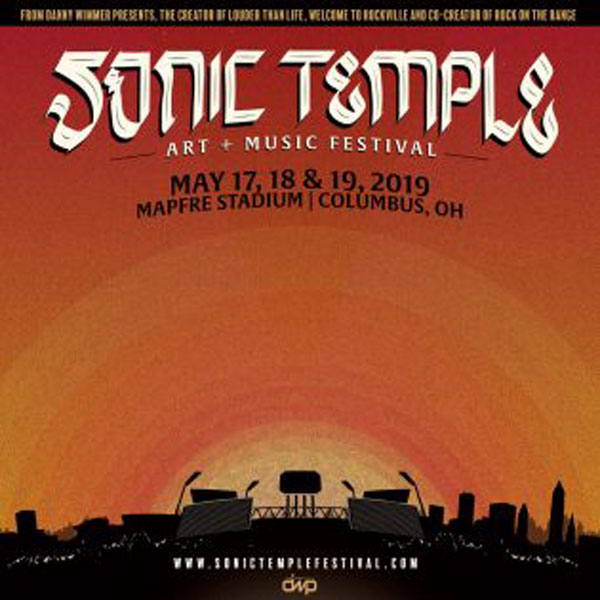 The rumors that have been swirling lately about the split between Danny Wimmer Presents and AEG Presents have turned out to be true and this will have a drastic change on the annual spring/summer festival season. We are sadly saying goodbye to both Rock On The Range and Carolina Rebellion, however Danny Wimmer Presents has revealed plans for a new spring festival called the Sonic Temple Art + Music Festival that will be held at MAPFRE Stadium in Columbus, Ohio instead.

Sonic Temple Art + Music Festival will debut at MAPFRE Stadium in Columbus, Ohio on Friday, May 17, Saturday, May 18 and Sunday, May 19, 2019 and will feature a premium food and beverage selection, art installations, plus expanded onsite experiences like never before to accompany a spectacular and diverse music lineup that will be announced in the coming months.

DWP has announced the 2019 dates for the following spring music festivals:
May 3 – 5: Welcome to Rockville at Metropolitan Park in Jacksonville, Florida
May 10 – 12: new destination music festival in North Carolina (details to be announced soon)
May 17 – 19: Sonic Temple Art + Music Festival at MAPFRE Stadium in Columbus, Ohio

In addition, Chicago Open Air will return, presenting a new event called A Day In The Park at Toyota Park in Bridgeview, Illinois during the weekend of May 17 – 19.

Los Angeles-based Danny Wimmer Presents is one of the largest independent producers of destination rock music festivals in America and produces events including Louder Than Life, Monster Energy Aftershock, Welcome To Rockville, Bourbon & Beyond and more. They’re also the co-creators of Rock On The Range, America’s largest and most acclaimed rock festival, which celebrated its 12th year in 2018 with 140,000 in attendance.

DWP creates memorable and all-encompassing festival experiences, leaving both consumers and partners with lasting and meaningful impressions. By combining A-list music talent with local cuisine and culture, DWP has become recognized within the industry for delivering the highest-quality entertainment experiences to fans, artists, sponsors, partners and host cities.
DWP is comprised of industry professionals with collective decades of concert, food and beverage, brand partnership and music industry experience.

“This is an exciting time at DWP and in the music festival business,” says Danny Wimmer. “Over the next two years, we will be making a series of major steps that are designed to push the U.S. rock festival market forward. This is the first of those announcements.”

“I believe that the festival market is at a major inflection point,” he continues. “The proliferation of music festivals has been good for competition and caused promoters to aggressively pursue expanded entertainment and enhanced experiences. At festivals like Bourbon & Beyond and Louder Than Life, for example, we have been able, and will continue, to rise to the challenge and push the boundaries in food programs, wine and spirits offerings, art installations and all of the other things that fans have come to expect. This growth is essential for rock festivals to hold their own against our cousins in other genres. We are about to embark on the next generation of rock festivals this spring.”

“I am so proud of what we accomplished with Rock On The Range, and we couldn’t have done it without our partnership with AEG,” adds Wimmer. “When we started Rock On The Range, there was no other festival in America quite like it but recently it became clear that we had different visions of where to take the festival next. The city of Columbus and our devoted rock fans deserve a one-of-a-kind, world-class festival, and that is exactly what Sonic Temple Art + Music Festival will bring to MAPFRE Stadium. Similarly, DWP will welcome a new festival in North Carolina this spring at a new location in the city of Rockingham that will allow us to go all night in a more European style setting. We will be announcing that festival’s name and exact location soon. We are also looking forward to bringing back Chicago Open Air better than ever and continuing to build on the record setting pace of Welcome To Rockville.”