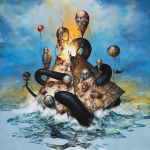 Today, alternative rock outfit Circa Survive released the music video for their new “Schema”, the lead single off their upcoming album Descensus. The album is set to drop on November 24 via Sumerian Records. The album is the much anticipated follow-up to 2012’s Violent Waves, an independent release that debuted at #15 on the Billboard Top… Continue reading