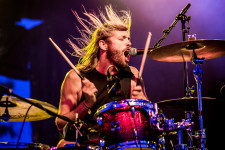 by Matt Bishop | November 1, 2016 Foo Fighters drummer Taylor Hawkins is continuing his productivity during the band’s hiatus. In addition to touring with his cover band Chevy Metal, Hawkins has announced that he will release a solo album on November 11. The disc is called KOTA and the lead single “Range Rover… Continue reading