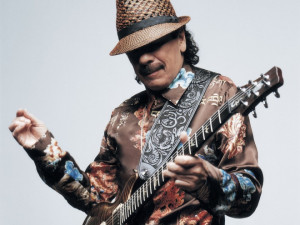 Renowned guitar virtuoso Carlos Santana has announced a 2015 world tour. The trek kicks off on March 3 at the Mahaffey Theatre in St. Petersburg, FL and wraps up on July 25 at the O2 Arena in London. In August, Santana will headline the Peach Music Festival in Scranton, PA along with Gregg Allman, Bob Weir, and more. Santana recently published his memoir The Universal Tone: Bringing My Story to Light which was featured in NPR’s “Best Books of 2014”. Back in September, Santana released his twenty-second studio album Corazón via RCA/Sony Latin Iberia. It is his first-ever Latin album. Throughtout his career, Santana is undoubteldly one of the greatest guitarists of all time. Thoughtout his career he’s garnered 10 Grammy Awards and 3 Latin Grammy Awards. In 1996 he was awarded the Billboard Century Award and in 1999 his opus Abraxas was inducted into the Grammy Hall of Fame. In 1998, Santana was inducted into the Rock and Roll Hall of Fame and in 2013, he became a Kennedy Center Honoree. – by Matt Bishop