Home » AEROSMITH AND SLASH CONFIRM 2014 U.S. TOUR, DETAILS AND DATES TO BE ANNOUNCED

AEROSMITH AND SLASH CONFIRM 2014 U.S. TOUR, DETAILS AND DATES TO BE ANNOUNCED 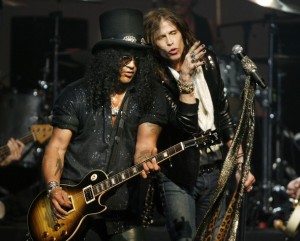 It’s official. It’s on. It’s goin’ down. Hard rock heavyweights Aerosmith and guitar icon Slash are set to hit the road later this year for a full U.S. tour. The announcement came late yesterday via Twitter by Aerosmith axman Joe Perry. Soon after, Slash and Aerosmith drummer Joey Kramer also tweeted the news. The tour is supposedly going down this summer, and dates are tentatively being released on Monday. Last summer, Aerosmith toured extensively with fellow Boston rockers Cheap Trick on the Global Warming Tour. The tour supported their 15th studio album, Music From Another Dimension, which debuted at #5 on the Billboard Top 200. It’s not clear whether or not the band will be releasing any new material for this tour, but front man Steven Tyler is currently working on his first-ever solo album. Slash toured the world extensively in 2012 and 2013 behind his acclaimed album, Apocalyptic Love. The album debuted at #4 on the Billboard Top 200 and featured Myles Kennedy & The Conspirators. Slash and the gang have been working on the follow-up, and a new studio album is due out some time in September. 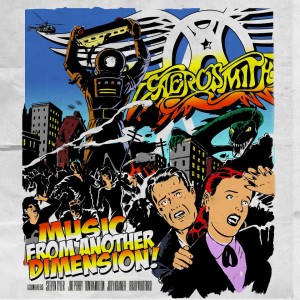 over 150 million albums worldwide. They are the recipients of countless awards including 4 Grammy Awards, 8 American Music Awards, 6 Billboard Awards, 12 MTV Video Music Awards, and the MTV “Icon” Award in 2002. The band has 11 multi-platinum albums to their name, and 21 Top 40 Billboard Singles. In 2001, Aerosmith were inducted into the Rock and Roll Hall of Fame. The band’s last tour saw them play 67 shows around the world, including a special gig in front of their first apartment. The building was recognized as a historical landmark in Boston. A plaque marker was placed in front of the building  commemorating the “Aerosmith Apartment” and was presented by the Music Museum Of New England as part of its Boston Music TrailTM, a series of markers at sites of musical significance around the city, made possible in part by a grant from the Music Drives Us Foundation.  The mission of the Museum is to preserve, honor and showcase New England’s musical heritage. It is building an online archive at mmone.org. Aerosmith’s latest effort, 2012’s Music From Another Dimension, debuted at #5 on the Billboard Top 200 and #1 on Billboard Rock Albums via Columbia Records. It’s the band’s long-awaited follow-up to 2001’s Just Push Play, which hit #2 on the Billboard Top 200 and was certified platinum. In 2004, Aerosmith released a blues cover album Honkin’ On Bobo, that featured one original song. Their latest album was recorded in Los Angeles as well as at the band’s studio in Massachusetts. It was produced by Jack Douglas, Steven Tyler and Joe Perry, with the exception of three tracks produced by Tyler and Marti Frederiksen. 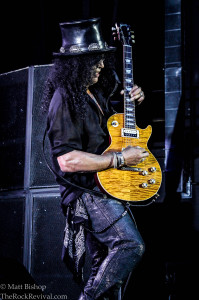 In 2004, he co-founded Velvet Revolver with Duff McKagen, Matt Sorum (The Cult, 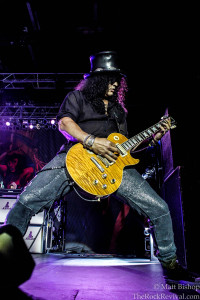 Guns N’ Roses). Along with rhythm guitarist Dave Kushner, the band handed the vocal duties to Scott Weiland (Stone Temple Pilots). Slash featuring Myles Kennedy & The Conspirators have been touring the world relentlessly for the last 2 years, with festival stops at Carolina Rebellion, Rock On The Range, Download Festival, and more. In addition to the Apocalyptic Love World Tour, Slash made a 10-day special guest appearance on Ozzy & Friends Tour in Europe. The tour was originally set as Black Sabbath reunion shows, but the bill was changed to Ozzy & Friends in the wake of Tony Iommi‘s on-going battle with cancer. Slash, along with Myles Kennedy and The Conspirators have been in the studio the past few months working on their new album is due out some time in September 2014. – by Matt Bishop (@The_Matt Bishop)(Top Left Photo Courtesy of Reuters) 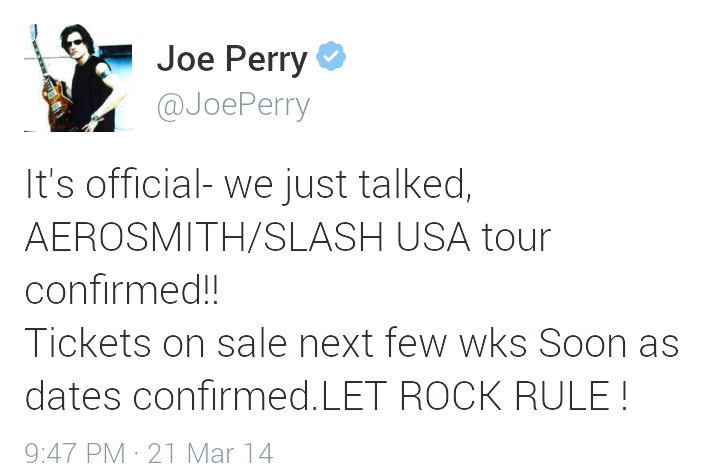 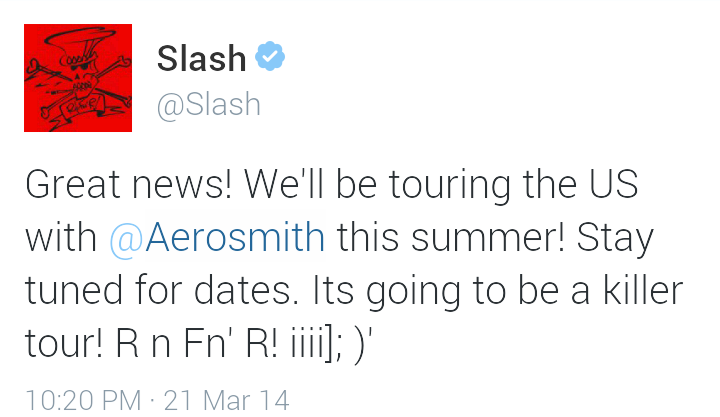