ENTER THE TEMPLE OF ROCK WITH MICHAEL SCHENKER (SCORPIONS, UFO) 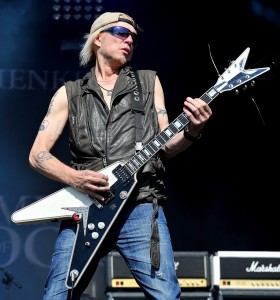 This week, I caught up with guitar virtuoso Michael Schenker on his U.S. Tour. Schenker is a legendary guitarist, considered to be ahead of his time and very influential. At the age of 17, he joined his brother Rudolf in heavy metal monsters Scorpions. In 1973, the Scorpions toured in support of UFO. Schenker was offered the lead guitar spot in UFO. With the blessing of his brother, Schenker left the band amicably after just 1 album (however, he did co-write the band’s upcoming second album). In 1974, UFO released their major label debut, and masterpiece, Phenomenon. Schenker’s guitar work was revolutionary, especially on tracks like “Rock Bottom.” In 1978, UFO release their other career highlight, Lights Out. Phenomenon and Lights Outserved as blueprints for many hard rock/heavy metal bands to come, such as  Van Halen, Quiet Riot, Mötley Crüe, Ratt, Airbourne, Volbeat, and The Answer, just to name a few. Schenker departed UFO in 1978 to pursue a solo career. He formed the Michael Schenker Group in 1979, and the McAuley-Schenker Group in 1987. A total of 21 albums (both live and studio) were released between the two groups from 1979-2008. In the decade of ’93-’03, Schenker would release 8 solo albums. He’s currently out touring in support of his latest solo release, Temple of Rock, which came out in 2011. The album is full of star-studded guest appearances, including contributions from former bandmates Pete Way (UFO) and Rudolf Schenker(Scorpions), Chris Slade (ex-AC/DC and ex-Uriah Heep), Michael Amott (Arch Enemy), Leslie West (Mountain), Carmine Appice (Ted Nugent/Rod Stewart), and more. Michael and I talked about the glory days, and it was very interesting to hear what he thinks they mean to rock music. Also, he’s showing no signs of slowing down. He’s going to be on the road for a while, so there’s plenty of time to catch up on tour and see this legendary shredder. – by Matt Bishop