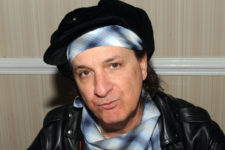 The glam rock legend had been battling cancer since 2018. New York Dolls guitarist Sylvain Sylvain has died. The legendary glam rocker lost his battle to cancer Wednesday after a three-year fight. He was 69. Sylvain revealed the diagnosis back in April 2019. “First the bad news,” he stated. “For… Continue reading