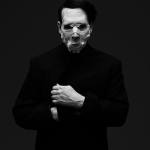 Marilyn Manson has released another track off his upcoming new album The Pale Emperor. The song “Deep Six” is available for streaming above. Manson also has unveiled the tracklisting for the new record, which can be found below. To support the album, Manson will be hitting the road in early 2015 for the The Hell Not… Continue reading