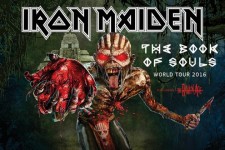 Heavy metal icons Iron Maiden have announced their 2016 U.S. tour dates. The Book of Souls World Tour kicks off on February 24 at the BB&T Center in Ft. Lauderdale, FL and wraps up on April 15 at The Forum in Los Angeles. While there are only a handful of dates booked,… Continue reading

Heavy metal icons Iron Maiden have announced their new studio album The Book of Souls. The disc is due out on September 4 via Parlophone Records (Europe)/BMG (U.S.). The band recorded the album in Paris with long-time producer Kevin Shirley (Led Zeppelin, Journey, Rush). The cover art was created by Mark Wilkinson,… Continue reading