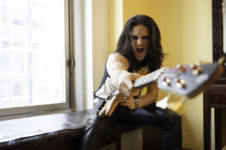 (TRR) Earlier this afternoon Adrenaline Mob were involved in a fatal car crash on I-75 in Florida. Bassist David Zablidowsky tragically passed away as a result of the crash. David joined Adrenaline Mob back in April. The band’s latest album We The People dropped on June 2 via Century Media Records/Sony Music Entertainment. In addition… Continue reading