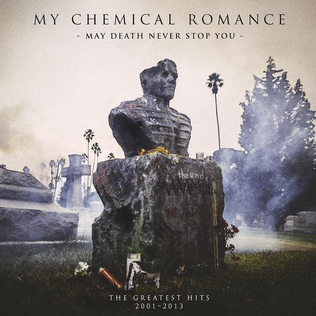 Alternative rock kings My Chemical Romance have released their magnum opus – a track somewhat-appropriately titled “Fake Your Death”. While the band called it quits almost a year ago, the word “Fake” in the title can only suggest the possibility that the band may not in fact be gone for good. Personally, I don’t think we’ve seen the last of My Chemical Romance. The song will be made available for download on iTunes to those who purchase the band’s upcoming greatest hits CD/DVD, May Death Never Stop You, which is due out on March 25. The compilation features 19 of the band’s best songs and 12 music videos. Frontman Gerard Way calls “Fake Your Death” a eulogy of sorts for My Chemical Romance. He released this statement about the song:

“I consider “Fake Your Death” to be the “last MCR song”, and to me, it is absolutely the final fully realized collaboration between the members of the band. Oddly, or fittingly, it was written while the Los Angeles Kings beat the New Jersey Devils and won the Stanley Cup, though this did not inform or inspire the song as I was unaware (along with James and Doug) that this was happening and have only a small interest in sports. After the game, the rest of the band had arrived at the studio where we added elements to its existing structure, fleshing it out some more, and it started to form.

What was not so obvious at the time was that the song was, and would serve as, a eulogy for the band, though I should have known it from the lyrics. I think internally I did, as I felt an odd sense of sadness and loss after hearing back the words on top of the music. I also felt a strange sense of pride in how honest it was, and could not remember a band recording a song of this nature, being so self-aware. Ending felt like something honest, and honest always feels like something new.

So it will exist, and it is no cowardly act to release something of this nature, but a service to those who believed in a band that did not compromise, and a wave goodbye to all. And yes, it is fucking heartbreaking.

And while I don’t believe the lyrics of the chorus today- I did at the time, which to me is a core ingredient to the music of MCR. And it is through that belief, and yours, that we were able to achieve many beautiful things.” – G.Way, Los Angeles, 1-20-14

Throughout their 12-year career, the band only released four studio albums. Their 2006 effort, The Black Parade, debuted at #2 on the Billboard Top 200, and earned the band a Grammy Nomination. The album certified platinum soon after. – by Matt Bishop