Rock News
by Matt Bishop
March 5, 2019March 19, 2022
(TRR) – Seminal alternative rock outfits Live and Bush are hitting the road together this summer. The Alt-Imate Tour will see both bands celebrating the 25 anniversaries of their biggest albums respectively with shows across the U.S. Special guests on the run will be Our Lady Peace.

Live will be celebrating their 1994 release Throwing Copper, while Bush will be touring on Sixteen Stone which was released that same year. The discs have sold more than 20 million albums combined, serving up No. 1 singles like “Lightning Crashes,” “Selling The Drama,” “Glycerine,” “Comedown” and “Machinehead.“ Both were spotlighted on Rolling Stone‘s list, “1994: The 40 Best Records From Mainstream Alternative’s Greatest Year,” and remain alt-rock classics thanks to radio hits like “Everything Zen,” “Little Things,” “I Alone” and “All Over You.“

“We are thrilled to be touring this summer with Live,” Bush frontman Gavin Rossdale said in a statement. “The wealth and depth of songs from both bands should provide a great night of music. Looking forward to seeing you all this summer.”
“Bush is a great band and Gavin is a super passionate singer and performer,” Live frontman Ed Kowalczyk stated. “I’m really looking forward to spending the summer with them. I know the fans are going to get one hell of a show.”
“It’s an amazing feeling to know that these songs still resonate so profoundly with people,” Kowalczyk added. “And I still totally get off on celebrating this music with them. With Throwing Copper, we were taking on big things with a big sound.  Love, truth, birth, death, philosophy, religion, spirituality…we were asking the perennial questions and poking around for answers with this massive and dynamic sound. It attracted people from all over the world. We were inviting them to imagine that rock and roll could be a valid forum for exploring these types of things…we built it and they came.”
“Sixteen Stone propelled us onto the musical landscape,” says Rossdale. “Those songs have found a way into the soundtrack of people’s lives and that is the highest compliment available. We’ve continued to make music that resonates with people.”
Tickets go on sale to the general public beginning Friday, March 15 at 10am local time at LiveNation.com. Citi is the official presale credit card for the tour. As such, Citi cardmembers will have access to purchase presale tickets beginning Tuesday, March 12 at 10am local time until Thursday, March 14 at 10pm local time through Citi’s Private Pass program. For complete presale details visit www.citiprivatepass.com. Artist presales are also available now through Thursday, March 14 at 10pm local time visit http://bushofficial.com/tour or http://freaks4live.com/home.html. 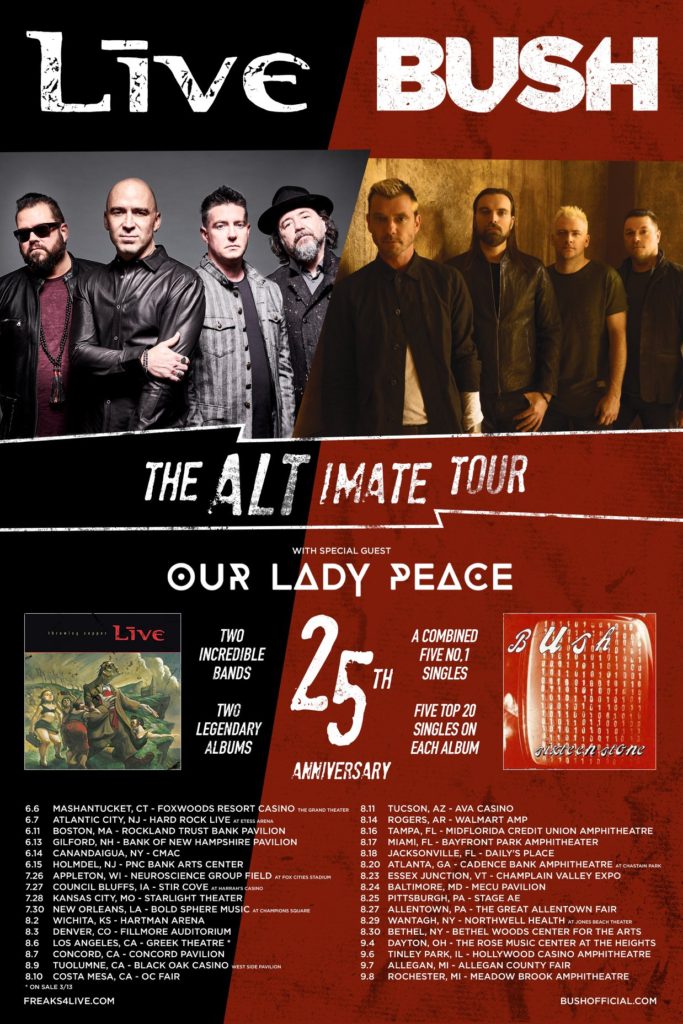