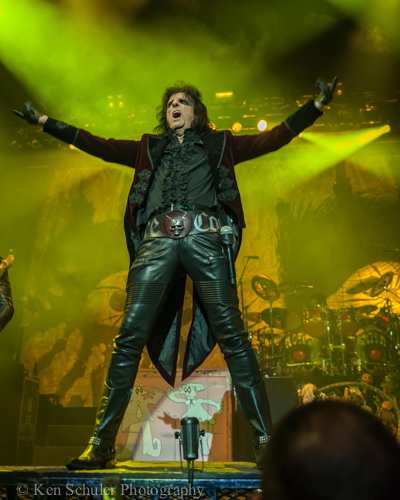 (TRR) Honestly, there is not better way to spend any evening than with the legendary Alice Cooper and truly he is showing no signs of slowing down. When we attend a concert we are looking to see a show and that is exactly what Cooper and his band (bassist Chuck Garric, guitarist Ryan Roxie, guitarist Nita Strauss, Tommy Henriksen and drummer Glen Sobel) provide. Cooper has more than earned his title as one of the godfathers of “shock rock” and continues to provide the audience with a performance that is a captivating visual and aural treat.

We had the pleasure of attending Alice Coopers recent show at the Lyric Opera House at the Modell Arena in Baltimore, Maryland and it is only fitting the Cooper has been recently touring in these types of venues. As you know opera houses are very ornate and a home for theater productions, however you can’t get more theatrical than Alice Cooper, who brought his A-game on this particularly paranormal evening.

We saw everything from the infamous guillotine to the Frankenstein table, as well as, swords, straitjackets and more. Cooper and his band have such amazing camaraderie on stage. Everyone knows their parts and the show was pure theatrical perfection. Cooper knows that the audience wants to see and delivers each and every time. We heard old favorites such as “No More Mr. Nice Guy”, “Billion Dollar Babies” and “Frankenstein”, as well as, a few new tracks off Cooper’s solid 2017 album release via earMUSIC “Paranormal” (iTunes).

Speaking of not slowing down, Alice Cooper has just announced that he will be continuing the “A Paranormal Evening” tour during the summer of 2018. Following on his current “A Paranormal Evening With Alice Cooper” March run, the tireless legend will embark on another North American trek. The summer tour kicks off on August 3 at the Wisconsin State Fair and winds through the U.S. and Canada before wrapping up in September.

In other Alice Cooper news, he will portray King Herod in the upcoming live television production of Jesus Christ Superstar! The show is set to air on Easter Sunday (April 1) on NBC.

More photos from Alice Cooper live at the Lyric Opera House below: