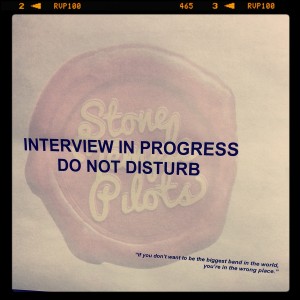 It was a rather historic night at the Sands Event Center in Bethlehem, PA on Wednesday, as Stone Temple Pilots returned to touring with a few new tunes and a revamped line-up. Back in May, to everyone’s surprise, Linkin Park‘s Chester Bennington played a set with STP at the 2013 KROQ Weenie Roast in Los Angeles, CA. Subsequently, this was Chester’s debut as the new voice of Stone Temple Pilots. Now, revitalized rockers have a new single, “Out of Time”, on the radio and on this night in Bethlehem, they embarked on their first tour since 2011.

I got a chance to sit down with bassist Robert DeLeo to talk about the energy surrounding the kick-off stop of their new tour. When I asked Robert how excited the band was, he simply replied, “Really excited. Very excited. This is a new beginning right now, so we’re cherishing it.” What makes this tour extra exciting is that fans have some new STP tunes to look forward too. The last time the band toured off a new record was in 2010 when they were supporting their self-titled sixth album. The band’s new High Rise EP hits record stores on October 8. “It’s just a continuation of what we always do – just trying to write the best songs possible, and Chester adds a new energy to it that’s really inspiring, actually,” Robert said. “Some good old rock ‘n’ roll.”

The members of Stone Temple Pilots met Chester Bennington back around 2000-2001, and both STP and Linkin Park 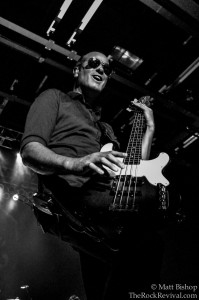 maintain friendships today. Robert and I continued to talk about the band’s new relationship with frontman Chester Bennington and it’s impact on the band. In regards to choosing to work with Chester, Robert said, “There wasn’t really much looking around and searching,” said Robert. “He [Chester] was ‘the choice’, so to speak.” You would think such a big change would be a tough adjustment for any band, but that wasn’t the case for Stone Temple Pilots. “This just happened,” Robert stated. “We got together, and there wasn’t really any thinking; we just did.”

Every band has to start somewhere. In 1992, Stone Temple Pilots started off by signing to Atlantic Records and releasing their platinum debut album that peaked at #3 on the Billboard Top 200. Since then, the band released one hit album after another, but have never forgotten how they got started. “We did this record in my basement,” Robert recalls. “During the writing of ‘Out of Time’, I had to stop and say, ‘Man, you guys realize we’re down in my basement right now?” Then, I found out where Stone Temple Pilots really got started. “I grew up in New Jersey, and I started in the basement. I was listening to KISS records with a tennis racket (pretending it was a bass, for sure).” 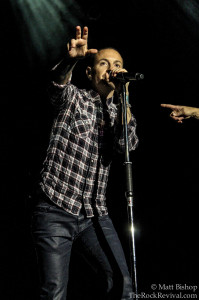 As Stone Temple Pilots walked out on-stage for the first time on this tour, one of those epic and rare music moments occurred. The band ripped into the ultra-heavy into riff of “Down”. Chester took the mic, and as he sang the very first line of the very first song of the band’s very first tour with their new line-up, “Pleased to meet you”, guitarist Dean DeLeo simultaneously pointed at Chester, as if to formally introduce him as the new voice of Stone Temple Pilots. The band proceeded to play a solid 14-song set, and then treated fans to a 3-song encore. The band compiled a great batch of hits and rarities, including “Vasoline”, “Wicked Garden”, “Big Empty”, “Church on Tuesday”, “Interstate Love Song”, and one of my personal favorites, “Silvergun Superman”. “Always, man! If you don’t have the nerves, that means you’re used to it, and I never wanna be used to it.” It’s like that Rolling Stones song “(I Can’t Get No) Satisfaction” – being satisfied is a great feeling, but I don’t think I ever wanna be satisfied. ‘Cause what’s left after that? 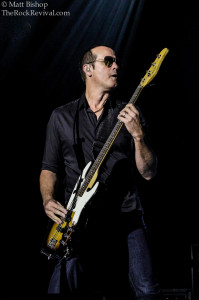 Records and released their debut album, Core. The disc peaked at #3 on the Billboard Top 200, and remains the band’s most commercially successful album to date. The band scored supporting slots with the likes of Rage Against The Machine, Megadeth, and others. In 1993, their single “Plush” won the award for Best New Artist Video at the MTV Video Music Awards. In January 1994, the band won two American Music Awards for Favorite Pop/Rock New Artist and Favorite Heavy Metal/Hard Rock New Artist. Later that year in March, the band garnered the Grammy Award for Best Hard Rock Performance for their hit “Plush”. In June, the band released their much-anticipated sophomore effort, Purple, which debuted at #1 on the Billboard Top 200. The album remained their for three weeks, and was eventually certified platinum, selling over 6 million copies. In 1995, the single “Big Empty”, which was featured on the soundtrack for the movie The Crow, won an MTV Movie Award for Best Song From a Movie. 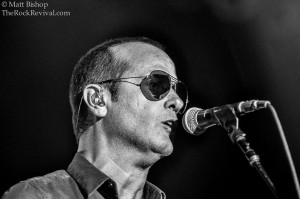 In 1996, STP released their third album, Tiny Music…Songs From the Vatican Gift Shop. The album hit #4 on the Billboard Top 200, and produced three #1 Mainstream Rock singles. One of the singles, “Trippin’ On a Hole In a Paper Heart”, was nominated for the Grammy Award for Best Hard Rock Performance. In 1999, the band released their fourth album, simply and appropriately titled No. 4. An ultra-heavy outing, the disc hit #6 on the Billboard Top 200, and it’s four hit singles help the album go platinum. The album’s lead single, “Down”, grabbed a Grammy Award nomination for Best Hard Rock Performance. That same year, STP were featured on VH1’s Storytellers and they toured with Red Hot Chili Peppers that summer. 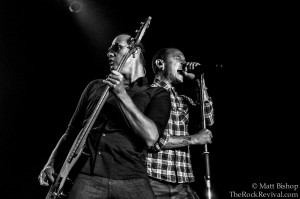 produced two hit singles – “Days of the Week” and “Hollywood Bitch” – and eventually went gold. That summer, the band headlined on the Family Values Tour, with support from Linkin Park, Staind, Static-X, Puddle of Mudd, and others. At the end of 2001, the band recorded the hit single “All In the Suit That You Wear”, which was featured on STP’s greatest hits album Thank You, released in 2003. From 2002 to 2008, Stone Temple Pilots went on hiatus. They returned in April 2008 for a North American Tour. In the fall, the band played Voodoo Experience in New Orleans. After a short break, the band played SXSW (US) and Download Festival (UK) in 2010. Their sixth studio album, Stone Temple Pilots, was released that same year. Debuting at #2 on the Billboard Top 200, the album sold over 62,000 copies in it’s first week of sales and produced three hit singles. 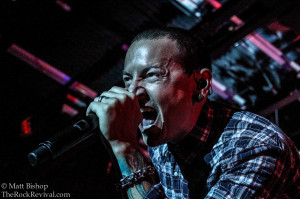 Stone Temple Pilots have achieved much throughout there illustrious career, and they still have a lot more bright days ahead of them. In May 2013, Linkin Park frontman Chester Bennington took over the band’s vocal duties. The band’s new EP, High Rise, is due out on October 8 via their own label, Play Pen Records, in association with Alternative Distribution Alliance. The record’s lead single, “Out of Time”, is currently impacting rock radio. STP is currently on a U.S. tour that will run through November. In February and March, the band will head to Australia to be one of the featured acts at Soundwave Festival 2014. Rising high once again, this band certainly isn’t out of time just yet. This is the Revival of Stone Temple Pilots. – by Matt Bishop (@The_MattBishop) 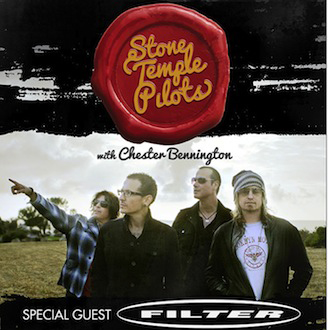