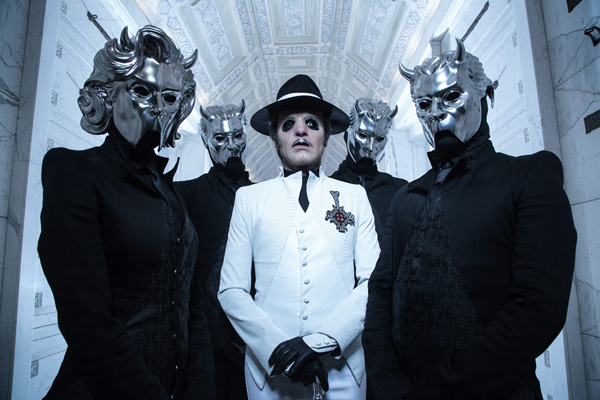 “Dance Macabre,” already with 15-million Spotify streams, is the second music video and radio single from the Grammy-winning rock/pop band’s most recent album Prequelle (6/1/18 (Loma Vista Recordings). Simultaneously apocalyptic with catchy, contagious hooks, the song tells of how some people coped with the devastation of 14th century Europe’s Black Plague that wiped out millions – by dancing and partying and seducing until they dropped. The music video puts its own twist on the celebration of the End of Days and beyond.

Twenty-eighteen has been a good year for Ghost. “Rats,” the first single from Prequelle, held the #1 spot at Rock Radio for a record-setting nine consecutive weeks. In North America alone, “Rats” has been streamed more than 14-million times, its companion music video has racked up more than 13-million YouTube views, and Prequelle has accumulated nearly 49-million streams. Ghost recently sold out the very prestigious Royal Albert Hall in London, and Metallica just announced the band will be Special Guest on its 25-date European stadium tour next summer. Ghost will headline its two-act “A Pale Tour Named Death” Fall North American tour that starts in Dallas on October 25. The North American trek includes two headline arena shows, The Forum in Los Angeles, and New York City’s Barclays Center. The complete itinerary is below and ticket information is accessible HERE.