Rock News
by Matt Bishop
December 14, 2018March 19, 2022
(TRR) – Multi-platinum rockers Breaking Benjamin have announced an arena tour next spring. The North American arena trek kicks off on March 15 in Saginaw, MI. The tour features special guests Skillet, Asking Alexandria, Underoath, Fight the Fury, and Diamante on select dates. Tickets go on sale to the general public for most dates beginning Friday, December 14 at 10am local time. For more information on tickets and VIP packages, visit BreakingBenjamin.com/Tour.
Additionally, Breaking Benjamin released the video for “Tourniquet” earlier this morning. The official music video can be streamed below. It is the third and final installment of a visual trilogy of videos released from their sixth studio album Ember. (WATCH HERE.) The album debuted at #3 on the Billboard Top 200 chart and has spawned off two #1 rock radio hits with recent singles, “Red Cold River,” and “Torn In Two,” marking the band’s eighth and ninth #1 singles to date.

Breaking Benjamin wrapped their co-headline national arena tour with Five Finger Death Punch this week. The bands hit the road together from July to September for a nationwide amphitheater tour, and set out on an extended leg from November 6 to December 11. Both acts raised over $250,000 for charity during the tour. Vetpaw and St. Judes Children’s Research Hospital received a combined $60,000 in charitable contributions. 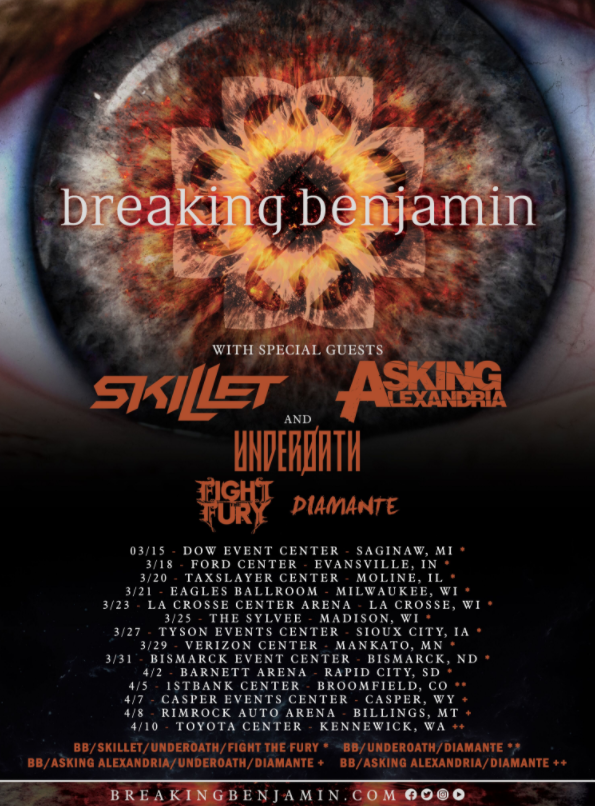